For 2016, SAGE Eldercare’s Board of Trustees will be led by Executive Committee members Kitty Hartman, President, Kathy Clingan, Secretary, John C. Hoffman, Treasurer, and Carol King Barrow, Immediate Past President. In addition, Maria E. Pasquale, Esq., of Summit has joined as a member of the Board of Trustees.

“We are pleased to announce that all of SAGE’s Executive Committee members from 2015 will be returning as leaders for 2016,” stated Fred Jenny, Executive Director of SAGE Eldercare. “Additionally, we would like to extend our gratitude to both Ruth Winetsky Skriloff of Summit and Rebekah Huston of Chatham who completed their terms with the board this year. We are also proud to have Maria E. Pasquale of Summit return as a board member.”

Kitty Hartman will remain as President of SAGE’s Board of Trustees in 2016. She joined the board in 2009, having previously served as secretary as well as the Development Committee Chair which oversees fundraising for the nonprofit organization. As a resident of New Providence, Ms. Hartman has been an active volunteer for a wide variety of local organizations. She currently delivers Meals on Wheels through SAGE and serves as Secretary of the Board of the Friends of the New Providence Memorial Library. She is a graduate of North Central College in Naperville, Illinois.

Kathy Clingan of Chatham will continue to serve as secretary and has been a board member since 2010. She is the owner of Take A Bough, LLC, which retails women’s clothing at boutique shopping events to raise money for nonprofit educational, arts, and health organizations. She is a former trustee of the New Jersey Shakespeare Theatre and the Chautauqua Institution, an educational and artistic community in western New York state. She is a graduate of Denison University.

Remaining at the treasurer post, John C. Hoffman of Chatham has been a board member of SAGE for four years. He retired from Prudential as a Managing Director in 2010 and received a BS from St. Peter’s University and an MBA from Pace University.

Carol King Barrow of Basking Ridge retired from PNC in 2013, where she was a Senior Vice President responsible for institutional investment management sales in northern New Jersey. She has served as a board member at SAGE since 2006 and has been on the executive committee as both a vice president and president. She received a BA from The Pennsylvania State University and an MBA from Temple University.

Maria E. Pasquale, Esq., is joining SAGE’s Board of Trustees in January 2016, having previously served on the board from 2005-12. Since 2001, Maria has been with Celgene Corporation, which has its global headquarters in Summit. She is Senior Vice President, Legal & Deputy General Counsel. Her responsibilities include managing corporate legal affairs such as intellectual property, litigation, and international matters.

She received her JD at Brooklyn Law School and a BS in biochemistry at the State University of New York at Stony Brook. Maria has three children, a daughter in college in Washington, DC and a son and daughter who are seniors at Summit High School.

Since 1954, SAGE Eldercare has been helping make the communities it serves amazing places to age. The organization provides a wide array of information, support, and services designed to help individuals lead the most independent and active lives possible. From helping with errands, to exercise classes, community programs, care planning, and home health care, SAGE’s expertise helps older adults remain independent in their own homes. SAGE is committed to being the leading provider of programs and services to meet the changing needs of older adults, their families, and caregivers throughout Union, Essex, Morris, and Somerset Counties. For more information, please call 908.273.5550 or visit www.sageeldercare.org.

Maria E. Pasquale, Esq., Photo Caption: Pictured is Maria E. Pasquale, Esq., of Summit who has joined SAGE Eldercare’s Board of Trustees for 2016. Since 1954, SAGE has been a unique community resource that offers a comprehensive array of programs and services which promote independence and quality of life for older adults. The nonprofit organization, which is located in Summit, NJ, serves older adults, their families, and caregivers throughout Union, Essex, Morris, and Somerset Counties, as well as across the United States. For more information, call 908.273.5550 or visit www.sageeldercare.org. 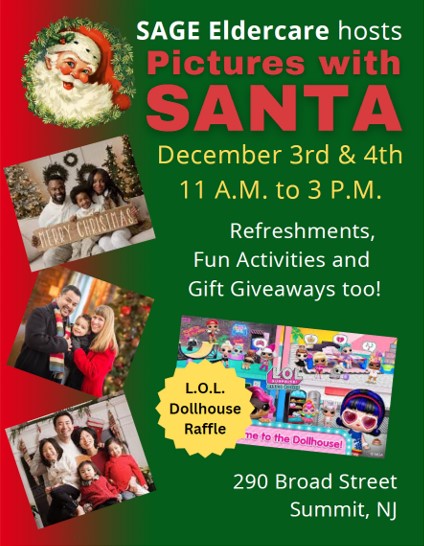 Registration is available at: https://www.eventbrite.com/e/pictures-with-santa-tickets-461362807577